Tugging at the Lakota Language Thread

Before I was born my mother spent some time in South Dakota living and working with the Lakota Sioux on a reservation. When I was a kid I always admired and was glad to hold the small cache of beaded jewelry that she had. I couldn’t speak to the stories or meanings of any of the images or shapes but they always were smooth rolling pleasure to have in my little hands. And while I never thought of myself as Sioux in any way, shape, or form hearing some of my mother’s stories from those times and holding those pieces made feel like a kind of kin to those people. 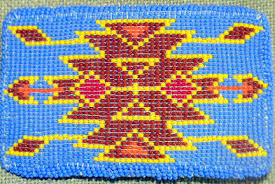 So when an opportunity came up a few weeks ago to have a two-day beginners crash course in Lakota here in New York City I put my cash on the proverbial barrelhead as soon as I could.

Ostensibly the class was for beginners but in my section of about thirty people at least fifteen had studied some Lakota and about two-thirds of those could form decent phrases.

While the class ended up going way to fast for me it was thrilling to hear this beautiful language and to know that while Lakota is an ancient spoken language the written language is less than a hundred years old and the standardized orthography is about forty years old. And yet there were about one hundred and fifty people – seemingly none of them Sioux – spending a weekend studying to keep this old language alive so that what the tongue knows about looking at the world might continue. We spent a good long while talking about the kin relationships in Lakota Sioux culture and how that understanding of kin is imparted in the language.

We rightfully fight to protect endangered animals big and small because we know that their appearance in the world matters and they are part of a web of life that should be sustained. We know that diverse ecosystems are resilient but too few are fighting for endangered languages which are just as vital and play the same part as any living creature. Lakota is fighting to live and people are standing to meet here and those same people are walking a trail so that this grand old tongue might speak of new kin relationships in an old way.

Worthy work in the world and I’m glad to be in a world where some people think this is worth all the time and effort and devotion. It is.

Now since Primal Derma is made of grass fed beef tallow it is heartening to know that tallow (in this case buffalo) has a rich tradition among the indigenous people of the plains of Turtle Island – as this continent is called. Now we didn’t learn this in class but they have at least two songs about the use of tallow that I read about in the book “

This song would have sung by women as they were pounding the meat and tallow ABOUT their ancestors who they considered to be making the meat and tallow. One of the women would be dancing and producing pemmican from her sleeve as the task was tended to.
Hal’nawa’ ha’ni’ta’quna’ni —
Hal’nawa’ ha’ni’ta’quna’ni —
Nin”n mani’ hanita’quna’ni
Nin”n mani’ hanita’quna’ni
I know in the pitfall
I know in the pitfall
It is the tallow they are using
It is the tallow they are using
This second song was about using tallow as bait to lure the sacred eagle to the pitfall so the Sioux might trap the bird without shedding any blood so that the tail or wing or wing feathers might be used for medicine or adornment. But in order to make ball of tallow…you have to handle the tallow. And if you need some tallow on your hands you know I’ve got a source for you over at PrimalDerma.com

All to say that there are old tongues that are ebbing coals which deserve some fanning and kindling. They have embedded in them deep ways of knowing the living world around those who speak in that way.

You don’t need to chase down Lakota but perhaps you might have some other tongues in your ancestry that is being forgotten. There were songs that were sung in those old languages that were praying for you to exist. If you have a chance, sing back if you can and pray that some of these other languages have a place in the world too.

Thanks for reading and talk soon enough.