The Song of Life among the Montana Blackfoot

Constitutions are a kind of creation story. These political documents try to say ‘this is who we are, where we are from, and what we value.’ The United States constitution starts with ‘we the people’ and so does the Montana constitution written in 1889.

But while the United States constitution veers into the purpose of the nation the Montana document reads thusly ‘We the people of Montana, grateful to God for the quiet beauty of our state, the grandeur of its mountains, the vastness of its rolling plain…’

This almost doesn’t make sense in a political document but it could be said that the place those people were from meant something very particular to them that was worth noting.

A few years earlier and a few miles north the Blackfoot chief Isapo-muxika (Crowfoot) signed a treaty with the Canadian government and he spoke at the signing ‘We are the children of the plains, it is our home, and the buffalo has been our food always.” He then gave a prayer for ‘the mountains, the hills and valleys, the prairie, the forests, the waters, and all the animals that inhabit them.’

He could have very well been writing the pre-preamble to the Montana constitution.

What might it mean to be so claimed by a place that your very existence is bound there?

The modern Blackfoot artist Darrell Norman, from Montana, makes a hide-bound declaration of interdependence that is deeply bound to his ancestors and the place that sung him into existence 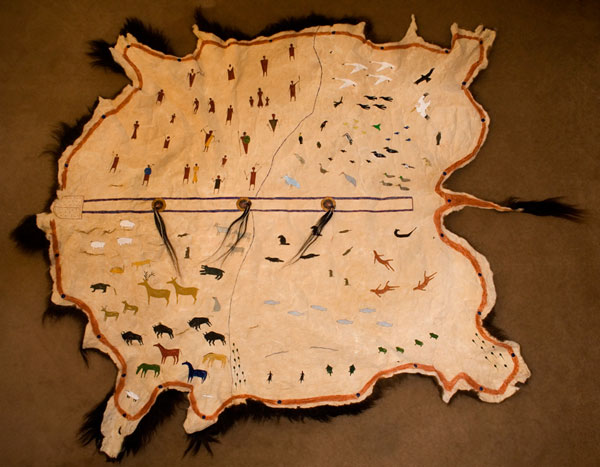 This hide painting done the good man, Mr. Norman, in traditional Blackfoot pictographic style shows the people with their relations – birds, animals, reptiles, and the whole living world who all sung each other into being.

To be sung into existence. That you might be a note in a natural choir is quite a wondering. And that might be a foreign thought to you or just a little myth local to the Blackfeet people of Montana and Alberta, Canada.

Might be. But you live in a world where people carry themselves as if it were so. And that itself might be part of the choir because some are singing high and others low.

But to be in a world like that could be seen as a real blessing.

Primal Derma is born of an ancient tradition where people like the Blackfeet and many others were so claimed by the land that they couldn’t do anything but use the fat of these animals as way of placing themselves more deeply into the Song of Life.

This little jar of fat isn’t magic and won’t suddenly give you a sense of place in the world or home you. But it might be a sign post for a direction you might walk.

Thanks so much for your ongoing support of this life affirming little venture. If you need some more – head on over to PrimalDerma.com