In ancient Wales if you were a young man and you gave a woman a spoon you were proposing to her.

We have all held spoons. Their design is so elegant and so simple. What could be easier than a spoon? I have tried to carve spoons from a block of wood. It isn’t easy.

Chunk by chunk. Sliver by sliver. I have also bloodied myself trying to carve a spoon. On more than one occasion. Bad cuts. To get from a block to something even distantly spoonish is an outrageous amount of time if you are using just a knife. And the shavings are beyond counting. All in service to getting some soup in your mouth or to stir your pot.

And while the design of a spoon is simple, carve one and you’ll see how not simple it is to get the angle of the neck to taper elegantly or the lip to be fine enough to use. And this is just for the most straight forward spoon. No artisanship, no decoration or special carvings. And without special knives to get the impression that makes the wood into ‘a spoon’ is a whole other level of difficult.

There was a time where people wore their spoons as a sign of their wealth. Their wealth WAS that they had a spoon.

This week I got a spoon from my friend Jonathan Pulker. Who lives in Victoria, British Columbia. Jonathan carves spoons.

I don’t know if you have ever had the experience of getting something so fine in your life – shoes, a painting, a friend that you suddenly are gasping in gratitude. ‘How did this come to me? What did I do right to have this?’ And then right on the tail of that is the realization that the other stuff just won’t do. It can’t. Because you’ve just entered into a different league. 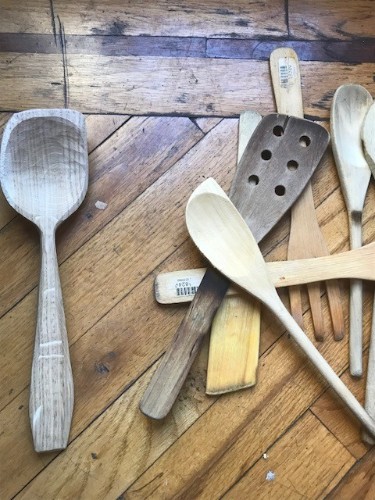 Jonathan wrote on the note that came with the spoon ‘Spoon carved with axe and knife. No sandpaper.” And then some care instructions.

No sand paper. Such is his patient knifework that he was cutting so finely that sandpaper was hardly needed.

I didn’t know that you could have so much ennobling pleasure from holding a spoon. But you can. And I’ve done it. This morning.

Immediately it made me realize that my other wooden cooking tools needed a review. And many just didn’t make the inspection. The standard had suddenly changed so dramatically that despite great milage from these other spoons they just had to go.

The Tsimshian Peoples from northern British Columbia have a tradition of being buried with spoon made of horn so that you might be able to eat and feed others in the next world. If you are a Welshman you might give your spoon away but at least you’d still get to use it. If you were Tsimshian that horn spoon went in the ground to feed your ancestors. 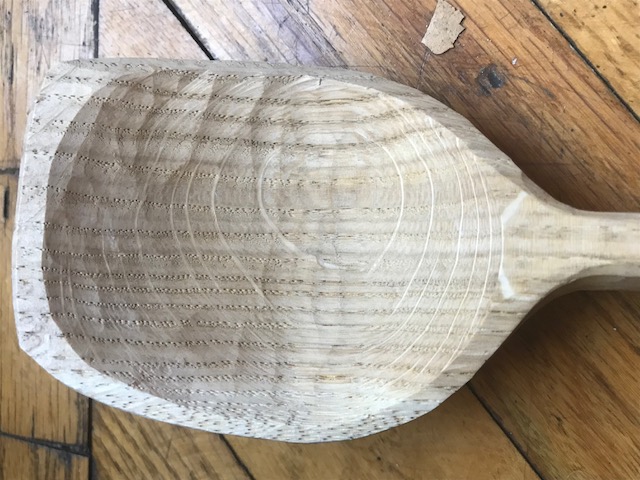 Jonathan isn’t Tsimshian but to know that that extraordinary place still has spoons coming from it that make you feel like you are about two inches taller and maybe breathing from your heels …that is culture making. The willingness to be so deliberate in your beauty making and your skill. That is a real wealth indeed.

Primal Derma tries very hard to be in this tradition of reclaiming these old culture making paths where labor and beauty intersect to offer something back into the world that comes from somewhere.

If you need some fine tallow, you know where to find us. In the meanwhile I pray you gather such wealth around you.